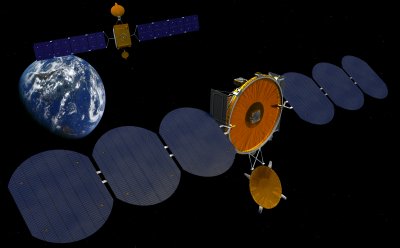 The ConeXpress-OLEV will operate as an orbital "tugboat," supplying the propulsion, navigation and guidance to keep a telecom satellite in its proper orbital slot for many years. Another application of the ConeXpress-OLEV is the rescue of spacecraft that have been placed in a wrong orbit by their launch vehicles, or which have become stranded in an incorrect orbital location during positioning maneuvers.

The ConeXpress-OLEV is a relatively small spacecraft, with the targeted mass at launch of 1200 kg. Only flight proven, off-the-shelf hardware is used in its production to keep costs down and ensure high reliability.

Apogee kick motors are used by nearly every telecommunications satellite for orbital boost and station-keeping, and they provide a strong, easily accessible interface point for the ConeXpress-OLEV' linkup that is always within the satellite's center of gravity.

The company is targeting the first ConeXpress-OLEV mission for 2007. Orbital Recovery Corporation has selected Ariane as the primary launch vehicle for its Geosynchronous Spacecraft Life Extension System (ConeXpress-OLEV), signing an agreement with Arianespace to orbit at least four ConeXpress-OLEV space tugs.

In a unique approach to spacecraft development, Dutch Space will build the ConeXpress OLEV based on a payload adapter that is used on every mission of the Ariane 5 launcher. This allows flight-proven hardware to serve as the structure for ConeXpress OLEV, and opens regular launch opportunities for the space tug on Ariane 5. Dutch Space has been working for some time on evolving the Ariane 5 payload adapter unit into a self-propelled spacecraft pursuing this conceptual work under a program supported by the European Space Agency. Dutch Space's self-propelled spacecraft concept was designated ConeXpress, a name that refers to the truncated cone shape of the Ariane 5 payload adapter unit. The adapter serves as an interface between Ariane 5 and its commercial satellite payloads, with the satellite mounted atop the unit. In its current utilization, the adapter unit is empty inside. For its operation as ConeXpress-OLEV, the adaptor will be equipped with ion propulsion system and guidance/flight control electronics. ConeXpress-OLEV will continue to serve as a payload adapter for Ariane 5 missions, and once the satellite atop it has been successfully deployed in flight, the vehicle will be released from the launcher to begin its own mission as an independent space tug.

After Dutch Space pulled out off the Orbital Recovery Corp., the remaining partners formed in 2007 a new venture called Orbital Satellite Service offering the SMART-1 based SMART-OLEV.