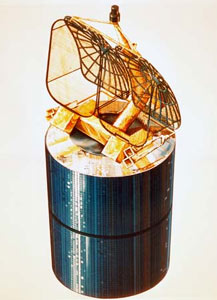 When two domestic communications satellites were launched into synchronous orbit during 1976, a new era in long distance calling began for the nation's phone customers. Relaying calls back and forth across the country, the satellites, called Comstar, were used jointly by the American Telephone and Telegraph Company and GTE Satellite Corporation, a subsidiary of General Telephone and Electronics.

The spin-stabilized satellites, plus two others built by the Space and Communications Group of Hughes Aircraft Company, later Hughes Space and Communications Company, now Boeing Satellite Systems, are owned by Comsat General Corporation of Washington, D.C. Comsat General leased the entire communications capacity of the satellites to AT&T under a long-term lease. In turn, AT&T and GTE operated earth stations located at major metropolitan centers throughout the United States.

Designed to keep pace with the burgeoning growth of telephone usage in the United States, Comstar employed the new dual polarized antenna system. AT&T officials had estimated that by 1980 out-of-state calls alone would reach 7.1 billion annually--an average of about 24 million calls every working day. Each Comstar, which operates in the C-band frequency, is equipped with 24 transponders capable of relaying a total of more than 18,000 telephone calls simultaneously throughout the contiguous United States, Hawaii, Alaska, and Puerto Rico.

In addition to the C-band system, each satellite carries a millimeter wave experimental package to conduct communications tests in the 19 and 28 GHz bands, a super-high frequency region coming into limited use.

Comstar has a height of 6.34 meters and a diameter of 2.38 meters. Cylindrical solar panels, covered with nearly 17,000 solar cells, provided the satellite with primary power of 760 Watts. Liftoff weight at launch was 1516 kg. The launch vehicle for the Comstars was the Atlas-Centaur booster. The satellites were launched from the Kennedy Space Center in Florida by the National Aeronautics and Space Administration under a contract with Comsat General.

SSC Parallax purchased Comstar 1D in July 2001 from LMGT. In April 2002, the satellite was bought by Tongasat and renamed Esiafi 1. The projected end of life is January 2005.