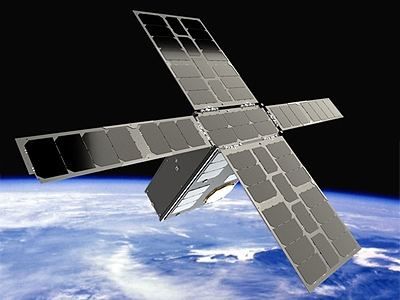 CASPA (Cold Atom Space Payload) is a 6U CubeSat nanosat by Teledyne e2v and research partner the University of Birmingham. Using quantum technology they will provide a state-of-the-art technical solution capable of creating ultra-sensitive cold atoms in space. The satellite is built by Clyde Space.

The project is funded by Innovate UK, the UKs innovation agency and also includes leading edge technology from project partners Gooch & Housego, XCAM, Covesion and the University of Southampton. CASPA will translate leading UK science into commercial products for space and other markets. It will take the technology out of the laboratory and build it into a small satellite payload that is capable of producing cold atoms in space.

The revolutionary technology is based on new developments in quantum technology which have resulted in the ability to cool atoms close to absolute zero making the cold atoms ultra-sensitive and capable of mapping tiny changes in the strength of gravity across the surface of the earth.

That will now be replicated in space through the Clyde Space-Teledyne e2v partnership with the Cold Atom Space Payload (CASPA) mission, the worlds first free-flying on-orbit demonstration for cold atom based science missions. It paves the way for cold atom instruments to be used in space.

Applications for instruments based on this technology include more accurate monitoring of changes in polar ice mass, ocean currents and sea level, the ability to monitor underground water resources and discover new underground natural resource deposits which are currently not detectable. The technology will also be used for deep space navigation and for providing higher precision timing sources in space.