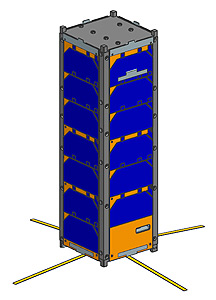 The CAPSat (Cool Annealing Payload Satellite) is a 3U CubeSat a technology demonstration mission for CubeSat navigation and control.

CAPSat was originally to investigate three unique science experiments utilizing the onboard payloads:

Due to a lack of development resources, the active cooling payload and the strain-actuated fine pointing control payload were determined to be unsuitable for flight by the mission team at the University of Illinois. With the approval of NASA, the payloads were de-manifested from the mission and uninstalled in order to reduce risk to the SPAD annealing payload. The respective deployable panels of the two removed payloads were also uninstalled from the spacecraft. The SPAD annealing payload is the sole science payload of the mission. The meaning of the CAPSat acronym was hence changed from "Cooling, Annealing, Pointing Satellite" to "Cool Annealing Payload Satellite".

It was selected in 2017 by NASA's CubeSat Launch Initiative (CSLI) to be launched as part of the ELaNa program. It was launched in August 2021 onboard of Dragon CRS-23 to the ISS, where it was deployed on 12 October 2021.