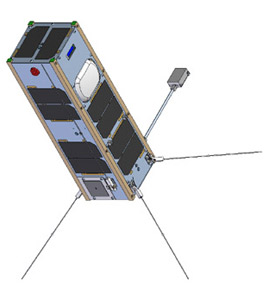 At 3.5 kilograms and the size of a carton of milk, CanX-2 will be a pathfinder mission that will launch on 28 April 2008 to evaluate novel technologies that will be used on the CanX-4 / CanX-5 dual satellite mission in 2008 to demonstrate controlled formation flying in space. Formation flying technology will open the door to larger missions for high resolution Earth observation and interferometric imaging that can also be used for space astronomy. The technologies to be tested include a novel propulsion system, custom radios, innovative attitude sensors and actuators, and a commercial GPS receiver.

The NanoPS experiment was developed at UTIAS/SEL. The objective is to demonstrate and evaluate its performance. The propulsion system consists of a liquid-fueled cold-gas thruster system [using sulfur hexafluoride (SF6, high storage density) as a propellant] with a total mass of < 0.5 kg. It features a thrust level of 50-100 mN with a specific impulse of 500-1000 m/s providing a total delta v of > 35 m/s. The nozzle is oriented such that thrusting induces a major-axis spin on CanX-2. NanoPS involves mainly attitude control maneuvers that spin the satellite about one axis.

In addition to evaluating these miniature technologies, the satellite will also perform experiments for other university researchers across Canada. These include a GPS radio occultation experiment to characterize the upper atmosphere (Calgary), an atmospheric spectrometer to measure greenhouse gases (York), a network communications experiment (Carleton), and a space materials experiments (Toronto).

The design (a "triple cube") will advance upon the original Stanford CubeSat concept and adopt the lessons learned from its predecessor, CanX-1.