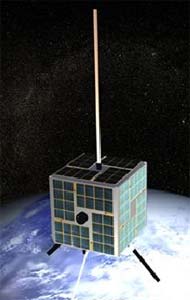 The BLUEsat project was started in 1997 with the aim to build and launch a small satellite into Low Earth Orbit.

The 260 mm cube-shaped spacecraft, weighing around 13 kilograms, is based on the AMSAT-NA Microsat bus. Magnets are used to passively stabilize the satellite and align it with the Earths magnetic field. The payloads consistis of a GPS receiver, an imager and the Lexan material experiment.

The BLUEsat Lexan Experiment was to test the UV resistance and durability of a piece of specially coated Lexan. The specimen was housed inside a Aluminium tube, a UV sensor will be located behind the Lexan. The satellite was to be subjected to constant UV bombardment in low earth orbit, and BLUEsat was to transmit the UV sensor reading as part of its telemetry, available for everybody to download.

A successful functional demonstration of the complete satellite was achieved in July of 2013. The project was finished in 2014, but without plans to launch the satellite.