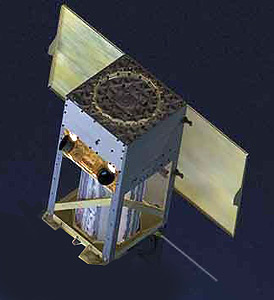 The BlackSky constellation of 1 m resolution earth observation microsatellites will be deployed by BlackSky Global.

The satellites feature the SpaceView-24 imaging system built by Harris Corp.'s Exelis with an aperture of 24 cm It has a ground resolution of 0.9 - 1.1 m from an orbital height of 500 km. They have a onboard propulsion for a 3 year orbital life. The satellites are built by Spaceflight Services based on their SCOUT bus.

The Block 1 Pathfinder satellites are capable to take up to 20 images per day in stills mode in four bands.

A initial constellation of 60 satellites is planned for 2021 that will be replaced every three years. The first six satellites have been funded by September 2015.