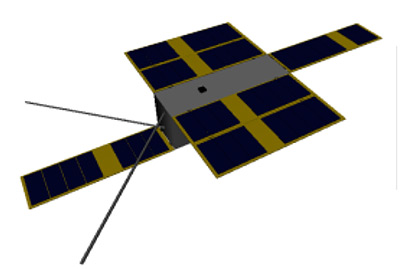 The Biarri project is a four nation defence related project involving Australia, the US, the UK and Canada to build three 3U CubeSats for precision flying experiments and a risk mitigation satellite.

As part of the project, the US is providing the launch and the Boeing Colony II bus (C2B), the UK is providing the communications links, Canada is providing the ground station infrastructure and Australia is providing the space-qualified L1-only GPS receiver, which BAE Systems has already qualified in its testing facilities. The FPGA based GPS receivers are designed to measure the precise relative positions of the Cubesats in their low earth orbit. The spacecraft will also be fitted with corner reflectors, thereby allowing the satellites to also be located using satellite laser ranging (SLR). They will be tracked by EOS in Australia using their laser tracking system.

Biarri-Point is a single satellite Risk Mitigation Flight performed in 2017. It is apparently included in the SHARC (Biarri-Point) satellite. It was deployed from ISS on 18 May 2017.

Biarri-Squad is a constellation of three satellites to be launched together in 2018. They were reported to have flown on Dragon CRS-15 towards the ISS, although no reports of deployment have appeared. Therefore these are listed here as still unflown.