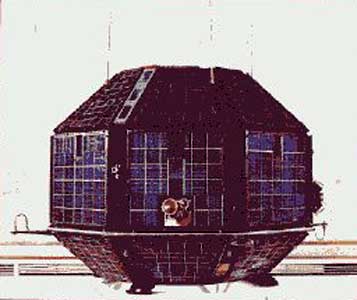 The two Bhaskara satellites were launched as part of the satellite-for-earth-observations (SEO) program, and were placed in orbit by Soviet Kosmos-3M launch vehicles launched from Kapustin Yar.

The main objectives were to conduct Earth observation experiments for applications related to hydrology, forestry, and geology using a two-band TV camera system, and to conduct ocean-surface studies using a two-frequency satellite microwave radiometer (SAMIR) system. Secondary objectives were to test engineering and data processing systems, to collect limited meteorological data from remote platforms, and to conduct scientific investigations in X-ray astronomy. Bhaskara was a 26-faced quasi-spherical polyhedron. It had a height of 1.66 m, and a diameter of 1.55 m.