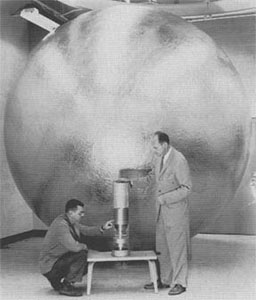 Beacon was a thin plastic sphere (12-feet in diameter after inflation), which should be the first US satellite to be visible to the naked eye. Secondary, it was to study atmospheric density at various levels.

Before the orbital attempt were made, several suborbital inflation tests were flown on Nike Cajun rockets.

Beacon 1 was launched by a Juno-1 with an added 5th stage. The upper stages and payload separated prior to first-stage burnout, thus the mission was a failure.

Beacon 2 was launched on a 3 stage Juno-2, but premature fuel depletion in the first stage caused an upper stage malfunction.