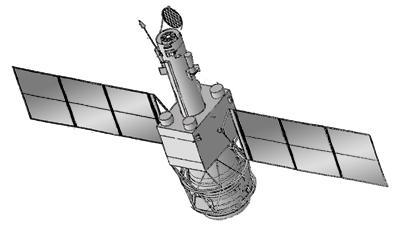 AXAF-S (Advanced X-Ray Astronomy Facility - Spectrometer) was the X-ray spectroscopy mission spun off from the original AXAF X-ray observatory. AXAF-S was to be a part of NASA's Great Observatories and was to measure high energy X-rays, emitted from such objects as black holes, neutron stars, and quasars.

The mission was to feature only one instrument, the XRS X-ray spectrometer, which was to provide X-ray spectra with a resolution of ~12 eV over the energy range of 0.3 to 10 keV by using calorimeters cooled to a temperature of less than 0.1 K. To provide this low temperature, it used an adiabatic demagnetization refrigerator, which in turn was cooled by superfluid Helium.

AXAF-S was to be a low earth orbit mission launched on a Delta-7920 from Vandenberg AFB in 1999.

The mission was cancelled in October 1993 and the XRS instrument was integrated into the Japanese Astro-E satellite.