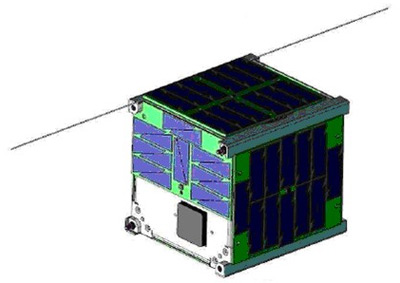 The Trieste University is developing a nanosatellite, called AtmoCube, in order to perform an analysis of the Space Weather.

The scientific instrument is a silicon detector to monitor the radiation environment. The payload also includes a magnetometer and a GPS. The main goal is to build a map of the flux of radiation impinging on the instrument. The additional instruments will provide measurements of the Earth magnetic field which are related to Space Weather effects. The GPS, providing the position of the region where the measurements are performed and the corresponding time instant, allows to correlate the results with other measurements performed on Earth and from the Space and therefore with the indexes of the Solar activity. In addition the orbital parameters measured by the GPS will be used to provide a measurement of the atmospheric density. All these measurements, performed in a continuous way with a global atmospheric coverage, represent a possibility to analyze the correlation among the three main systems that characterize the Earth: the Sun and Solar activity, the Earth atmosphere and the terrestrial environment.

The satellite was baselined for the maiden flight of the Vega in 2012, but was not launched.