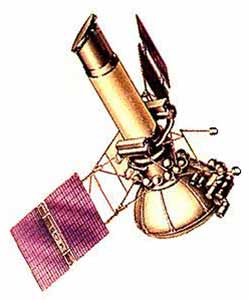 The Soviet Astron orbital station was designed primarily for UV and X-ray astrophysical observations. It was injected into orbit on 23 March 1983. The satellite was put into a highly elliptical orbit, with apogee ~200,000 km and perigee ~ 2,000 km. The orbit kept the craft far away from the Earth for 3.5 out of every 4 days. It was outside of the Earth's shadow and radiation belts for 90% of the time.

The spacecraft was over 6 m long, and its main instrument was Soviet-French 5 m long UV telescope. The station ceased function in June 1989, well past its expected one year mission lifetime.

The second major experiment aboard Astron was an X-ray spectrometer. The experiment, SKR-02M, consisted of a proportional counter sensitive to 2-25 keV.X-rays, with an effective area of 0.17 sq-m. The field of view was 3 degrees × 3 degrees (FWHM). Data could be telemetered in 10 energy channels. The instrument began taking data on 3 April 1983.

This experiment provided data on the prolonged low state of Her X-1 in 1983, and the 1984 turn on of the source. It also observed sources in Orion, Taurus, and Leo. The investigation of accretion of material from red giants to neutron stars was specifically targeted.