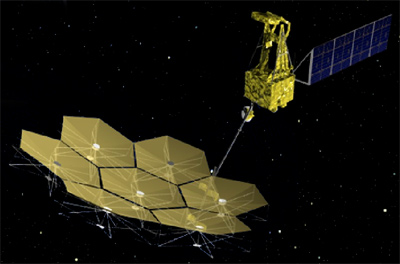 Following the success of the Muses-C (VSOP, HALCA, Haruka), a next generation space VLBI mission, currently called VSOP-2, is being planned. Very Long Baseline Interferometry (VLBI) is a technique used by radio-astronomers to achieve very high angular resolution imaging of celestial radio sources, by combining the signals from widely separated radio telescopes. Space VLBI extends this beyond the Earth by placing one telescope on a satellite. For VSOP-2, higher observing frequencies, cooled receivers, increased bandwidths and a larger telescope diameter will result in gains in resolution and sensitivity by factors of 10 over the VSOP mission. The possibility of including a rapid slewing capability for the spacecraft is also being pursued, so that observations using the phase-referencing technique will enable the sensitivity to be improved even further.

The VSOP-2 spacecraft will employ a 10-m off-axis paraboloid antenna with dual-polarization observing bands at 8, 22, and 43 GHz. The receivers at 22 and 43 GHz will be cryogenically cooled. With an apogee height of 25,000 km, an angular resolution of 38 micro-arcseconds will be achievable at 43 GHz. A phase-referencing capability is being considered.

The proposal for VSOP-2 was submitted to ISAS in September, 2005, and after several selection rounds, formally approved by the Board of Councillors of ISAS in April, 2006. The VSOP-2 satellite will be the 25th ISAS Scientific satellite, and has been given the pre-launch name ASTRO-G. Development funding has been received to continue studies of the main antenna, receivers, data downlink system, etc., and it is expected that funding for the mission will begin next April, at the start of the next Japanese fiscal year. The expected launch date for the ASTRO-G satellite is early 2012.

The mission was cancelled in July 2011 due to a lower than expected accuracy of a large 10-m diameter antenna reflector.