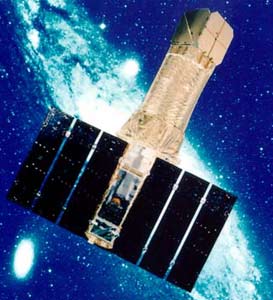 The objective of the ASCA (Advanced Satellite for Cosmology and Astronomy) (or Astro D) mission was to perform spectroscopic X-Ray astronomy in the wavelength band 1--12 keV. with particular emphasis on spectroscopy of the iron K band. Another objective of ASCA was imaging of the structure of extended sources such as clusters of galaxies and supernova remnants. ASCA carried four identical telescopes with a total effective area of 1300 cm² at 1 keV.and 600 cm² at 6--7 keV. ASCA was a cooperative mission between Japan [ISAS] and NASA. NASA provided four conical grazing incidence, multilayer thin foil mirrors. Two CCD-based detectors were provided by MIT. Japan provided the imaging gas scintillation proportional counters (IGSPC), the spacecraft, the launch vehicle, and a ground station. In return for its scientific instrument contribution, NASA was allocated 15% of the observing time after the initial seven or eight month Performance Verification (PV) period. In addition, 25% of the observing time was set aside for collaborative proposals between US and Japanese scientists.

A solar flare on 14 July 2000 caused heating and expansion of the upper atmosphere which increased the drag and external torque on ASCA. The attitude was perturbed so the solar panels lost lock on the Sun, resulting in discharge of the batteries and possible unrecoverable damage. ASCA is now flying in a free spin mode with a period of about 3 min and a nutation angle of about 40 degrees. The mission can only be commanded in real time during daylight from KSC when the solar panels are directly powering the spacecraft. All observations have been cancelled and odds of recovery are considerd remote.