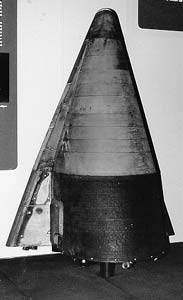 Originally the ASSET program was to verify the superalloy heat shield of the X-20 Dyna-Soar. The vehicle's biconic shape and low delta wing were intended to represent Dyna-Soar's forward nose section, where the aerodynamic heating would be the most intense - in excess of an estimated 2200°C at the nose cap. After the cancellation of Dyna-Soar, ASSET was continued for general reentry heating and structural investigations, which would help the design of future reusable space vehicles.

ASSET ASV 1 was launched on a Thor-DSV2F rocket on 18 September 1963. The flight was successful and good telemetry was received, but the vehicle was lost when it detached from the floatation device after splashdown.

ASSET ASV 2 introduced the Thor-DSV2G Delta booster, but the launch failed when the Delta second stage failed to ignite.

ASSET ASV 3 also used a Thor-DSV2G Delta booster. This time the mission was successful and the recovery system performed perfectly. The vehicle was recovered and is today on display at the Air Force Museum at Wright-Patterson Air Force Base in Dayton, Ohio.

ASSET ASV 4, the final flight, again used a Thor-DSV2G Delta booster. The mission was successful with good telemetry, but recovery of the vehicle was not successful due to a parachute failure.