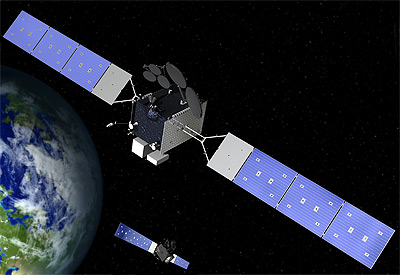 Space Norway will cooperate with the satellite operator Inmarsat and the Norwegian Ministry of Defence to offer mobile broadband coverage to civilian and military users in the Arctic. Two ASBM (Arctic Satellite Broadband Mission) satellites will be built by Northrop Grumman and are scheduled to be launched by SpaceX in late 2022. The ground station will be established in North Norway and ensure Norwegian control of this critically important capability.

Each of the two satellites will carry multiple payloads, and the system is scheduled to be operational for at least 15 years with users able to switch between current geostationary satellites and the HEO satellites. Each satellite will have a mass of 2000 kg and provide 6 kWatt power through their sun arrays.

Inmarsat will use Ka-band to extend their Global eXpress service into the arctic, operating under the designation GX 10A and 10B.

Space Norway's X-band for the for the Norwegian Ministry of Defense will provide Arctic coverage interoperable with the Wideband Global Satcom (WGS) constellation.

The US Air Force is to to provide the Extremely High Frequency eXtended Data Rate payloads on ASBM. The payloads are part of the Air Forces Enhanced Polar System-Recapitalization (EPS-R), designed for secure northern communications. The EPS-R payloads will fill a vital gap in providing secure communications for war fighters in the Arctic. The constellation its replacing, the Enhanced Polar System (EPS) is not expected to last until the polar components of the Protected Tactical SATCOM and Evolved Strategic SATCOM are fielded in the 2030s, and so EPS-R will serve as a stopgap measure in the interim. Both EPS-R and EPS are effectively the Arctic components of the Advanced Extremely High Frequency constellation.

Both satellites will be launched in late 2022 on a SpaceX Falcon-9 v1.2 (Block 5) 9 rocket into a Highly Elliptical Orbit (HEO) of 16 hour period, which will provide full coverage from 65 degrees North which in practical terms is the area North of the Arctic Circle.