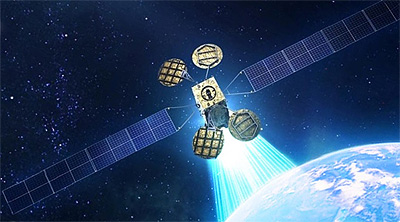 ARSAT-SG 1is an Argentine HTP comsat project and is slated to enter service in 2023, and will be positioned at 81 degrees West.

The satellite, replacing the cancelled ARSAT 3, will be based on the new platform developed by the GSATCOM joint venture formed in 2019 between INVAP and the Turkish Aerospace Industries (TAI) company from Turkey. This new platform incorporates the main global technological trends of the space industry for telecommunications, such as complete electric propulsion, both for the elevation of the satellite from the transfer orbit to the geostationary orbit, and for its maintenance in the location from where it performs operation.

The communication payload is to be a HTP ((High Throughput) Ka-band payload. The payload will have more than 30 beams that will cover the entire continental Argentine territory, the island of Tierra del Fuego and part of the neighboring countries of Argentina.

The project for ARSAT's third communications satellite was restarted in February 2020, four years after ARSAT 3 was put on hold. A contract is expected to be signed in late 2020. A launch date of 2023 is envisaged.