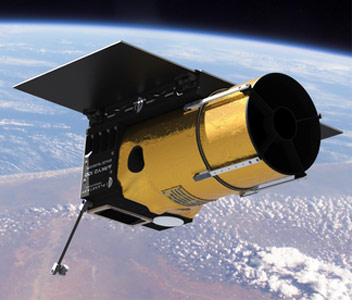 The Ceres or Arkyd-100 Space Telescope will provide the Plantary Resources company with the core spacecraft technologies necessary for asteroid prospecting, while creating an usable earth resources The Arkyd-100 contains the critical structures, avionics, attitude determination and control, and instrumentation that enable low-cost asteroid exploration.

The Arkyd-100 Space Telescope provides views of the Earths surface and deep space, including the rich, virtually unexplored areas between Earth and the Sun. Central to its configuration and functionality is a precision imaging system. With arc-second resolution, the Arkyd-100 spacecraft camera will provide detailed celestial and Earth observations where you want them, and when you want them. The Arkyd-100 is capable of surveying for near-Earth asteroids during one orbit, then be retasked for rain forest observation on the next. The satellite uses infrared and hyperspectral imaging, providing 10 m hyperspectral and 15 m midwave unfrared resolution.

Planetary Resources is deploying a constellation of Arkyd 100 spacecraft in low-Earth orbit to deliver valuable information-rich data to markets today. With just 10 satellites, the Ceres constellation provides weekly hyperspectral and mid-wave infrared data for any spot on Earth at a lower cost than existing multispectral data. Furthermore, leveraging its revolutionary on-board processing power, the Ceres constellation can also be programmed on-board to search for and identify specific materials or temperature signatures  a capability that does not exist from satellites or drones today. The system is also highly-intelligent and customizable. Ceres can send complete hyperspectral data cubes if required or can return specifically requested wavelengths, temperatures, or even simplified algorithmic answers about a target.

In 2016, Planetary Resources announced, they would use the satellites initially to create an earth observation satellite system called Ceres to carry out infrared and hyperspectral imaging. In June 2017, they reduced the efforts in the earth observation system, refocusing on the asteroid resources mission.

Due to financial troubles, it is unlear, if any further satellites can be launched.