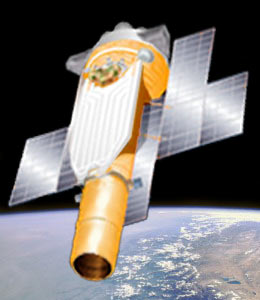 The Araks-N was a electro-optical area reconnaissance satellite, which had reportedly a resolution of 2 - 10 m (panchromatic and infra red). Its high orbit gave it a longer loitering time over the target.

Araks-N was built on NPO Lavochkin's Arkon platform, which was a development of the proven Mars / Venera interplanetary platforms. LOMO, St. Petersburg provided the 1.5 m telescope (17V317) for the satellite.

Araks-N 1 (Kosmos 2344) was successfully launched on 6. June 1997, but suffered an battery failure immediately after reaching orbit. The satellite could be operated for 4 months, but was finally lost.

Araks-N 2 (Kosmos 2392) reached successfully orbit on 25. July 2002. It operated successfully for about one year, until the pressurized service compartment lost pressure, leading to the loss of the mission.

After the launch of Araks-N 2, it was considered to build a third unit from the thermal test prototype, the ground test prototype and spare parts. This would have been launched in a lower orbit using the Fregat upper stage. This satellites was to be funded from the troubled Persona reconnaissance satellite project. Eventually, Araks-N 3 was cancelled and the Persona project was continued.