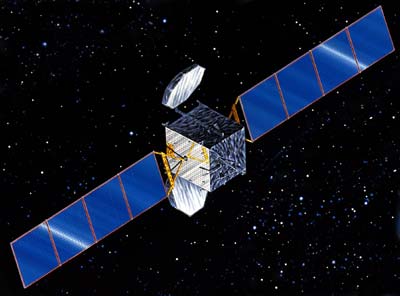 The APStar 2 satellite was designed to serve two-thirds of the world's population - from China, Japan, and Vietnam on the east; to Russia, Eastern Europe, and India on the west; and to Australia on the south. APT Satellite Company, Ltd., of Hong Kong, ordered the high-power Hughes HS 601 spacecraft model in November 1993, as well as satellite control facility equipment and operator training.

APStar 2 was to have provided video services for program distribution and syndication; data services for business applications; and services for video, radio, data, and telephone transmission. The C-band payload, using 52 watt traveling-wave tube amplifiers (TWTAs), had 26 active and six spare transponders. The Ku-band payload had six active channels (with two spares) powered by 50 watt TWTAs and two high-power channels (with one spare) powered by 120 watt TWTAs.

APStar 2 was designed to generate 4300 Watts with its two solar wings, each carrying four panels of K-4 3/4 solar cells. The APStar 2 configuration included two dual-surface, hexagonal reflectors, each with a diameter of 2.1 meters, located on the east and west sides. A 30-cell nickel-hydrogen battery was included to power the spacecraft during eclipse. APStar 2 used Hughes' advanced shaped-reflector technology, which concentrates the satellite's beam over targeted land areas while avoiding uninhabited oceans. Hughes' patented, highly efficient design eliminates the need for multiple feedhorn configurations.

For launch, the solar arrays and antennas were folded alongside the spacecraft, forming a compact arrangement of 2.7 meters by 4 meters by 3.6 meters. With the solar wings unfolded and the antennas deployed, APStar 2 measured 26 meters from end-to-end and 7 meters across. The bipropellant propulsion system included an integral 490-Newton (110 lbf) Marquardt liquid apogee motor plus thirteen 22-Newton (5 lbf) thrusters for stationkeeping.

APStar 2 was to complement the smaller Hughes-built APStar 1 and be used primarily for television broadcasting. APStar 2 was launched 25 January 1995, on a CZ-2E rocket from Xichang, China, but it was destroyed shortly after liftoff, when the payload fairing collapsed. As a replacement, APStar 2R was ordered.