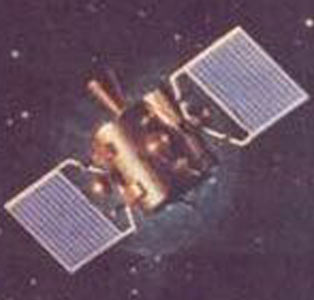 Apple (Ariane Passenger Payload Experiment) was an experimental communications satellite with a C-band transponder, launched on 19 June 1981 by an Ariane-1 launch vehicle of European Space Agency[ESA].

The spacecraft bus was cylindrical with a diameter of 1.2 m and a height of 1.2 m. The communications payload consisted of two 6/4 GHz transponders connected to a 0.9 m diameter parabolic antenna. The fourth stage of the SLV-3 rocket (S-0.26) was used as an apogee kick motor.

For 27 months (until attitude control fuel depletion) the 350 kg Apple successfully served as a testbed for the entire Indian telecommunications space relay infrastructure despite the failure of one solar panel to deploy. Apple was used in several communication experiments including relay of TV programmes, and radio networking. It went out of service on 19 Sep 1983.