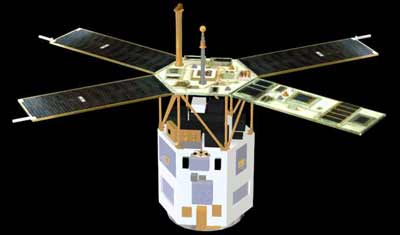 Based on Orbital Sciences' PegaStar bus which integrates the booster upper stage avionics and spacecraft bus functions. PegaStar can support payloads from 50 to 150 kg and provide up to a 10-year mission life. A modular design supports a wide range of stabilization and pointing requirements. Orbit average power available to the payload is approximately 100W to 200W, depending upon the mission orbit.

The PASP (Photovoltaic Array Space Power) Plus experiment conducted test on advanced photovoltaic technologies under carefully controlled conditions in order to compare and evaluate the different ways in which solar cell performace is degraded by the space environment. The operation of solar arrays at higher than the standard voltage level (28 volts) can result in much more efficient power production. PASP Plus was able to bias the arrays to both high positive and negative voltages (as high as 500 volts) in order to study how much the voltages could be increased before arcing and sparking occurred. Tweleve types of arrays were tested including four silicon-based planar arrays, three gallium-arsenide on germanium planar arrays, three new-material (indium-phosphide and two other multi-bandgap) planar arrays, and two concentrator designs.