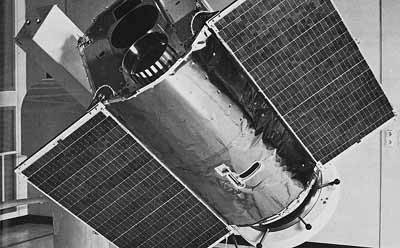 The ANS (Astronomische Nederlandse Satelliet or Astronomical Netherlands Satellite) was an sun-synchronous satellite, designed as an astronomical observatory.

The spacecraft was attitude-controlled by magnetic coils interacting with the earth's magnetic field, by reaction wheels, and by a so-called "yo-yo" (a device for initially despinning the spacecraft by ejecting two masses that carry away most of the angular momentum). Attitude sensing was carried out by solar sensors (coarse, intermediate, and fine), horizon sensors, a star sensor, and a magnetometer. Two guide stars near the object being observed served as the final pointing references.

Experiments on board observed celestial objects in UV and X-ray wavelengths. During its observing lifetime of 20 months (September 1974 to June 1976), ANS measured the positions, spectra, and time variations of galactic and extragalactic X-ray sources in the energy range 2 to 15 keV. and obtained over 18000 observations of about 400 objects in the UV range 1500 to 3300 Angstrom.

A duplicate ANS 2 satellite was built as a back-up, but was not launched. It was later donated to a museum.