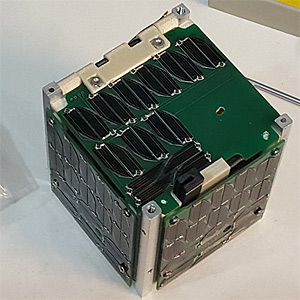 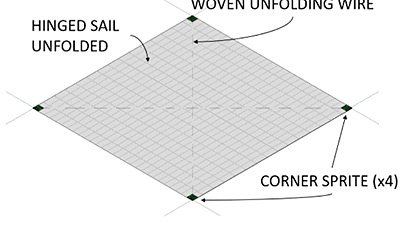 Alpha is a 1U CubeSat technology demonstration mission by the Cornell University to deploy a 1 × 1 m light sail with four tiny chipsats called Sprites attached.

Developed by students at Cornell University, Alpha is a CubeSat technology demonstration of the deployment and operation of a 1x1m, laser-propelled, light sail carrying four Sprite ChipSats. Sprites are a unique technology that can enable a wide range of space missions at a drastically reduced cost and weight. The technical benefits and accessibility of the Sprites and light sail give many possibilities for future sail-borne ChipSats, such as, implemented swarms for both planetary-science and Earth science missions, where solar energy can push the sail when readily available.

Each Sprite ChipSat is a miniature spacecraft that weighs 4.2 grams, measures 3.5 × 3.5 cm and has its own power, sensors, attitude control, and communications subsystems. Originally intended as a micro-electro-mechanical sensor (MEMS), these spacecrafts can downlink data from low Earth orbit. The Sprite was developed at Cornell University in the Space Systems Design Studio laboratory and have been tested to a Technology Readiness Level (TRL) 6 with the support of NIAC in 2005-2007, Northrop Grumman and Lockheed in 2011, a Kickstarter campaign in 2011-2014, and CASIS in 2015.

The Alpha CubeSat is designed to deploy a single Sprite and the attached light sail. The 1U bus has its own communications, command & data handling, attitude control, power, and deployment systems. The solar sail is only 0.04 mm thick - with its 4 Sprites, the sail weighs less than 100 grams.

0.5U of the CubeSat is dedicated to the payload (solar sail and 4 Sprites), and 0.5U contains the flight computers, communications and power storage. The six faces of the CubeSat each have solar panel on them that generate all the CubeSats power. The top solar panel is attached to a hinge and serves as the release door for the deployer.