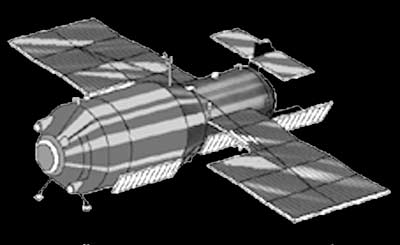 The Almaz-T ("diamond") spacecraft design was based on the Almaz crewed orbital station. The Almaz-T spacecraft had two 100 m² solar panels and batteries to provide power. The spacecraft used reaction wheels to maintain attitude and 3-axis stabilization. The interior was pressurized by nitrogen to sea level. The Almaz-T program had its origins in 1981, when the spacecraft was originally designed as a military reconnaissance craft. Although the basic layout of the Almaz space station was retained, it did not have any docking devices, so that no Soyuz or Progress service craft could be used. Almaz-T was designed and manufactured and operated by NPO Machinostroenye.

A first satellite was originally planned to be launched in July 1981, but the launch was put on hold only three days before the launch date. The vehicle was left in storage until the program was restarted in 1985. The first launch (Kosmos (1803)) was made in 1986, but the vehicle failed to reach orbit.

Cosmos 1870 successfully carried the Almaz SAR prototype. It was finally comandeded to reenter on 29.07.1989.

Almaz 1 was launched on 31.03.1991 and operated successfully. The Almaz-1 spacecraft reentered the Earth's atmosphere on 17.10.1992 after 18 months in orbit out of an expected 30 month mission. The spacecraft executed a controlled descent over the Pacific Ocean after the maneuvering fuel was unexpectedly exhausted because of frequent orbit re-positioning due to increased solar activity.

An improved version was planned as Almaz 1V, but was never launched.