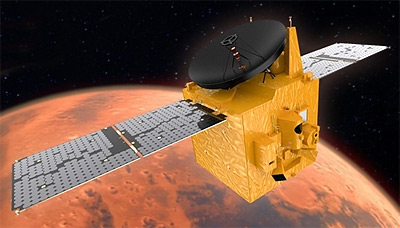 Emirates Mars Mission (EMM), also known as Al-Amal or Hope, is the first Arab mission to Mars. It was developed at the UAE Space Agency and was built at Mohammed bin Rashid Space Centre (MBRSC).

The Emirates Mars Mission will focus on the Martian atmosphere and climate. It will study how the lower and upper layers of the atmosphere interact with each other. It will search for connections between todays Martian weather and the ancient climate of the Red Planet.

The Emirates Mars Mission spacecraft is a compact cubic spacecraft built from aluminium in a stiff but lightweight honeycomb structure and surfaced with a strong composite face-sheet. It weighs approximately 1350 kg including fuel, and measure 2.37 m wide by 2.90 m tall. The spacecraft was built at the Laboratory for Atmospheric and Space Physics, at the University of Colorado at Boulder.

The craft will charge its batteries using two 600 Watt solar panels. The solar panel arrays will be folded flat against the sides of the probe for launch, and will unfold once the probe is in orbit.

The spacecraft will communicate with Mission Control by a high-gain antenna with a 1.5 m wide dish. The probe will also have low-gain antennas, which are less directional. Communication bandwidth will be from 1.6 mbs near earth to 250 kbps at Mars.

The 3-axis stabilzed spacecraft will be equipped with star tracker sensors that will help it to determine its position in space by studying the constellations in relation to the sun. For attitude control it will use a set of internal reaction wheels. It will be equipped with two sets of rocket thrusters: four to six large Delta V thrusters which are used for orbit insertion and changes, and eight to 12 small Reaction Control System (RCS) thrusters for delicate manoeuvring.