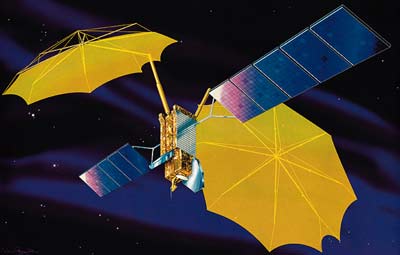 Garuda 1 [Lockheed Martin]
Agrani 1 would have been similar

Afro-Asian Satellite Communications Ltd. of Bombay has chosen Lockheed Martin Telecommunications in 1998 to build the Agrani multipurpose geostationary communications satellite system. The contract, worth an estimated $600 million, was signed on April 4 and announced May 11. Lockheed was to build the Agrani 1 satellite based upon their A2100AXX bus and have slated it for launch in 2001. The satellite was to provide both mobile and rural telephone services as well as direct broadcasting services to India.

That system is based on the same platform as ACeS (Garuda), suggesting the two systems could possibly cooperate.

The U.S. State Department's refused to grant an export license for the Lockheed Martin satellite and the Industrial Finance Corporation of India backed out of the deal and forcing Afro-Asian Satellite Communications to switch to a reduced version of its project.