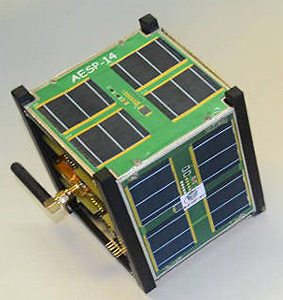 AESP-14 satellite is a brazilian 1U CubeSat, which was developed as a scientific and technological cooperation basically between the ITA with the LIT  INPE-MCT and other departments from the INPE, in São José dos Campos, São Paulo, Brazil.

The payload of AESP-14 consists of a Langmuir Probe for measurement of electron density and temperature of the ionospheric plasma. The payload was developed in the department at Space and Atmospheric Sciences of INPE.

AESP-14 was deployed from the International Space Station at 14:30 UTC on 5 February 2015. No signals from the satellite were received.