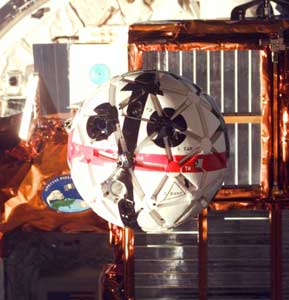 AERCam (Autonomous Extra-vehicular Robotic Camera) is a prototype of a small, hand deployed and captured, remote controled inspection tool that could be used for remote inspections of the exterior of the International Space Station and of the Space Shuttle.

The AERCam Sprint free-flyer is a 35.5 cm diameter, 17 kg sphere that contains two television cameras, an avionics system and 12 small nitrogen gas-powered thrusters. The sphere, which looks like an oversized soccer ball, was released by Mission Specialist Winston Scott during the STS-87 spacewalk and flew freely in the forward cargo bay for about 30 minutes. The free-flyer was remotely controlled by Pilot Steve Lindsey from the Shuttle's aft flight deck using a hand controller, two laptop computers and a window-mounted antenna. The AERCam is designed to fly very slowly at a rate of less than one-quarter of a foot per second. Remote control of the AERCam is performed through two-way Ultra High Frequency radio communications, with data regarding the status of the free-flyer's systems transmitted back to the operator. Television images are transmitted back to the operator via a one-way S-band communications link. During the experiment operations, live television images also were relayed via Columbia to Mission Control. Two miniature color television cameras are mounted on the free-flyer, one with a 6 millimeter lens and another with a 12 millimeter lens. The exterior of the free-flyer sphere is covered with a sixth-tenths of an inch-thick layer of Nomex felt to cushion any inadvertent contact with a spacecraft surface and prevent damage.

Most of the free-flyer's systems are derived from the development of the Simplified Aid for EVA Rescue (SAFER) backpack. The AERCam's thrusters, basic avionics, solid-state rate sensors, attitude hold electronics, nitrogen tank and hand controller are identical to those used on the SAFER. The AERCam thrusters, however, produce eight-hundredths of a pound of thrust while the SAFER thrusters produced eight-tenths of a pound of thrust.

The free-flyer is powered by lithium batteries. Its electrical supply and nitrogen supply are designed to last at least seven hours, the maximum length of a normal spacewalk. The AERCam sphere has a small floodlight built in that is identical to floodlights used on the helmets of spacesuits. Spaced equally around the sphere also are six, small, flashing yellow light-emitting diode lights that make the free-flyer visible to the operator in darkness.

The front of the sphere is marked by stripes and arrows while the back is marked by dots. These markings assist the operator in determining the orientation of the AERCam. A small fabric strap on the sphere serves as a handhold for the spacewalker while deploying and retrieving the free flyer.