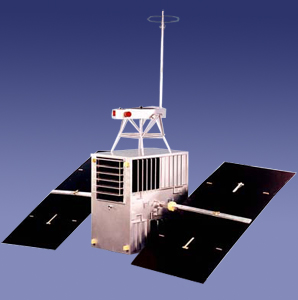 Advent was an ambitious military communications satellite project, which would have operated in geosynchronous orbit.

The development of these satellites started in 1959. The 544 kg three axis stabilized satellites would have been launched directly into geostationary orbit by the then new Atlas-LV3C Centaur-D rocket. This requirement was one of the design drivers for the Atlas Centaur vehicle. 10 Advent satellites were planned.

ARPA decided to combine the related efforts of the three military services into project Advent and assigned overall project management to the Army in a newly created US Army Advent Management Agency located at Fort Monmouth and reporting through the chief of R&D of the Army. In the Advent project, the Army had major responsibility for the payload and ground terminal systems, the Navy for shipboard terminals and the Air Force for the launching vehicles and related operations. Under the pressure of the Air Force to include the satellites into their mission, the Army's responsibility was reduced to ground terminals and ground support.

The complete Advent satellite was to have fixed to its body a horn antenna for receiving communication signals from the surface stations and a separate paraboloidal antenna for relaying them back to Earth. It was to have four one-way radio-frequency channels (that is, two two-way channels), and was to be able to handle information at the rate of half-a-million bits per second on each RF channel: alternatively it was to provide twelve voice channels on each HF channel. The satellite was to rebroadcast the messages at a power level of one watt per RF channel.

Project Advent was cancelled in 1962 due to complexity of the spacecraft, delay in launcher availability, and cost over-runs. It was replaced by the much simpler IDCSP.