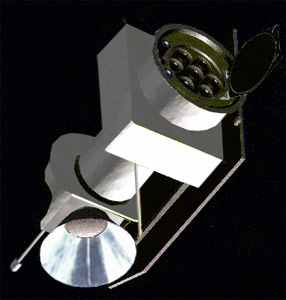 ABRIXAS was to discover more than 10,000 new X-ray sources mainly active galaxies above 2 keV. In the centres of these galaxies, presumably black holes convert gravitational energy into high-energy radiation. Very often, like in our galaxy, clouds of gas and dust, which can be penetrated by high energy X-rays, cover the centres.

The satellite was launched in April 1999 on a Russian Kosmos-3M booster from Kapustin Yar.

Shortly after launch, the main battery overheated due to overcharging and failed. A workaround to communicate with the satellite when its solar arrays were sunlit was tried out, but after three days the communication attempts failed, rendering the mission a complete loss.

In 2003 a reflight of the ABRIXAS instrument as a NASA SMEX mission under the name DUO (Dark Universe Observatory) was under study, but was not selected.

ABRIXAS reentered the atmosphere on 31 October 2017.