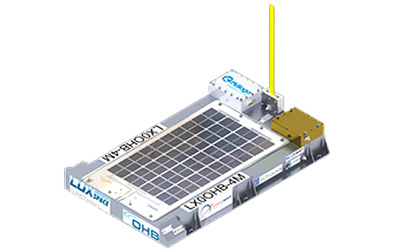 The spacecraft, named in honour of the late OHB-System founder Manfred Fuchs, was part of the last stage of a lunar mission, due to be launched end of October 2014. 4M was mounted in the equipment bay of the third stage of the CZ-3C/G2 launch vehicle.

The 4M spacecraft was powered primarly by 28 high energy density, non-rechargeable battery cells, guaranteeing the nominal mission whilst providing 6 W to the main payload and the experiments. As a secondary power source two arrays of each eight triple layer solar cells were mounted on the payload charging four × Li-Ion cells.

The spacecraft systems consisted of an on-board computer (FM430 and interface board), an I/Q modulator, a RF power amplifier, providing a nominal 1.5 W into the antenna and a quarter-wavelength antenna. As a scientific payload, a radiation experiment was to determine the radiation dose on the trajectory.

The trajectory was a lunar flyby and return to Earth, which wwould end with 90% probatility with re-entry in the atmosphere. With a chance of 10%, 4M might end in a complex highly eccentric earth orbit.

The nominal mission duration was 8.17 days. The Lunar flyby occured about 4.04 days. As the 4M spacecraft had no capabilities for course correction, the final trajectory was not determined and depended on the final injection vector. During flyby, the distance to earth was about 399636 km at most with a distance to the Moon between 12000 and 24000 km.

The 4M spacecraft transmited continuously on 145.98 MHz with a 1.5 W power input at a simple monopole antenna. Transmission was about to start 77.8 minutes after launch. The amateur radio payload transmited a JT65B signal, which could be decoded by radio amateurs.

4M transmitted its last message on 11 November 2015. After more than 438 hours, 4M has largely exceeded its design lifetime.