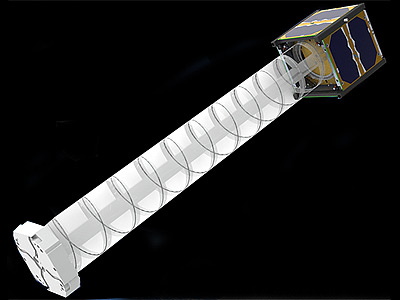 3Cat 4 is a 1U CubeSat developed at the Universidad Politécnica de Cataluña (UPC) to perform multiple technological experiments.

It will demonstrate the suitability of this type of platforms to perform Earth Observation with passive instruments. More specifically, the ³Cat-4 will fly a GNSS-R (Global Navigation Satellite System - Reflectometry) instrument capable of measuring several weather phenomenon, geographical characteristics and ocean parameters, by detecting and analysing the reflected signals of satellite navigation constellations (e.g. GPS, GLONASS, Galileo, BeiDou). Complementing its remote sensing capabilities this nano-satellite will also embark a passive L-band radiometer implemented with a commercial SDR (Software-Defined Radio). Along with these two payloads, the ³Cat-4 also integrates an AIS detector (Automatic Identification System) allowing it to track ships in their intercontinental routes.

3Cat 4 was selected by ESA's "Fly Your Satellite!" Program in 2017 to be deployed in orbit from the ISS in 2018 or 2019. Eventually it was assigned to the maiden flight of the Ariane-62 launch vehicle.