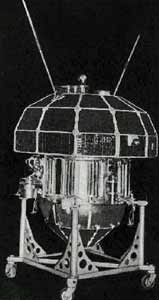 The 2MS series were prototypes of small solar powered research satellites. They were developed by OKB-1. The mission of these satellites was to develop systems for future satellites, and to record data about cosmic rays and radiation. Launch vehicle was the small Kosmos booster.

The first 2MS satellite was placed into low orbit under the designation Kosmos 3. It had a perigee of 204 km, an apogee of 1142 km, an inclination of 49° and an orbital period of 93.8 minutes. It reentered the earth's atmosphere on 17 October 1962.

The second satellite, Kosmos 5, reached also a low Earth orbit with a perigee of 192 km, an apogee of 1578 km, inclination of 49.1°, and an orbital period of 102.6 minutes. Kosmos 5 was among several satellites inadvertently damaged or destroyed by the US Starfish Prime high-altitude nuclear test on 9 July 1962 and subsequently created radiation belt. It decayed after nearly one year on orbit on 2 May 1963.