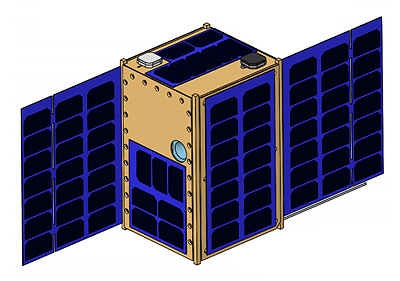 The satellites are build to the 12U CubeSat form factor based on the 1HOPSat TD prototype. The satellites each contain an imaging telescope payload for recording images and video of customer specified regions of the Earth at 1 meter ground sample distance (GSD). The collected images will be transmitted to Earth through multiple ground stations over a single carrier, OQPSK, X-band radio link. Commanding and telemetry will be implemented with an experimental C-band radio using 802.11n (OFDM) technology. Commanding and telemetry are supplemented with an Iridium short burst data (SBD) radio providing low rate data

During launch, the satellites will be contained in 12U CubeSat payload dispensers attached to the upper stage of the launch vehicle. The 12U dispensers provide full enclosure of the satellite until deployment in orbit. After deployment and prescribed time delays, solar panels and antennas will deploy, imaging and communications will begin. There will be electric propulsion included on the constellation spacecraft.

The initial launch of eight satellites was planned as a secondary payload in 2020 or 2021 into a 600 km orbit, but was delayed. Apparently the project for the 1HOPSAT constellation has been shelved.