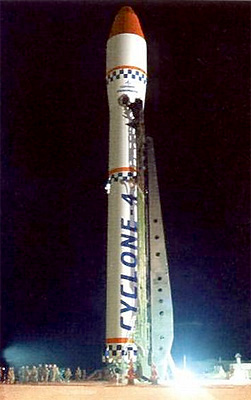 Tsiklon-4 (Cyclone-4) was a Ukrainian project to develop a new three stage version of the Tsiklon rocket family to be launched from the Alcantara launch base in Brazil.

Development began in 2002, with the maiden flight originally aimed for 2006. Following a series of delays, this has slipped, and was last scheduled for no earlier than 2016.

Alcantara Cyclone Space (ACS) is a binational Ukraine-Brazil company created for development and operation of the Launch Complex and launching the Ukrainian Tsiklon-4 Launch Vehicle from the Alcantara Launch Center in Brazil to provide space launch services for the Governments of Brazil and Ukraine, as well as for commercial customers.

The vehicle is derived from the Tsiklon-3 (11K68) rocket, but features an new, reignitable upper stage with the RS-861K engine, a new 4 m payload fairing and a modernised flight control system. Being launched from Alcantara, it would be able to launch modest geostationary transfer orbit missions.

In 2015, the project was on the verge of collapsing, due to funding problems and the reported unavailability of the Russian built engine due to the Ukraine conflict. The Brazilian side in early 2015 decided to pull out of the project.

In September 2016, Yuzhnoye announced, that it was pursueing a launch site in North America for the Tsiklon-4M variant (in fact a new Zenit-based launch vehicle) and assessments of possible sites were completed in the U.S. and Canada.