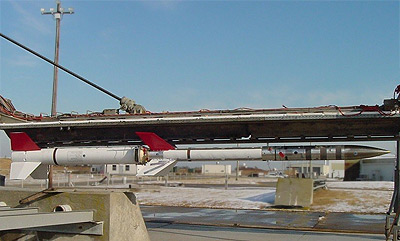 The basic Terrier Mk.70 motor is 3.937 m long with a principal diameter of 45.7 cm. There is a 7.6 cm interstage adapter which allows for drag separation at Terrier burnout. Typically, the Terrier booster will utilize two spin motors to reduce dispersion and also serve as drag plates. Each Terrier fin is 0.427 m² in area. Normally, the fins are canted to provide two revolutions per second spin rate at Terrier burnout. The weight of the Booster system is 1038 kg.

The Lynx is 35.6 cm in diameter and 2.794 m long. The Lynx fins are normally canted to provide for four revolutions per second spin rate at burnout.

The standard payload for the Terrier Mk.70-Lynx has a principal diameter of 35.6 cm and utilizes a 3:1 ogive nose cone, although an 11° total angle cone can also be flown. The envelope of payload lengths that can be flown has not been established yet, however, it is expected to be similar to the boosted Orion family. The rocket system will carry a 113 kg payload to 378 kilometers and a 227 kg payload to 254 kilometers when launched from sea level at an 85° launch angle.

Standard hardware includes a 3:1 ogive nose cone and a capacitive discharge ignition system. Separation systems can be provided to separate the payload from the motor during ascent.

The Lynx is also used as a single stage rocket as Lynx.