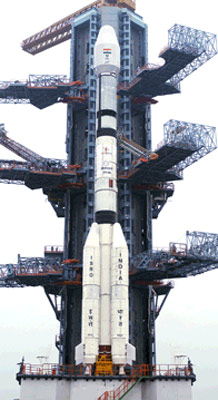 The indian GSLV (Geostationary Launch Vehicle) series are launch vehicles in the 2500 kg to GTO class, which feature a unusual combination of different kind of stages. The first stage consists of a large solid rocket, derived from the PSLV first stage. It is augmented by four liquid fueled strap-on boosters, which have a longer burn time than stage 1. Each booster is powered by a Vikas engine and remains connected with stage 1 during the flight. The second stage is a liquid fueled stage featuring storable propellants. It is the same as used in the PSLV and is also powered with a Vikas engine. The cryogenic stage 3 for the Mk.1 version is powered by the Russian KVD-1M engine, which was originally developed for a cryogenic version of the Proton launch vehicle. It was replaced by the Mk.2 version, which features the indian built CE7.5 engine. The D2 flight introduced some changes developed for the GSLV Mk.2 version like the S-139 stage 1 and the high pressure Vikas engines on the strap-ons.