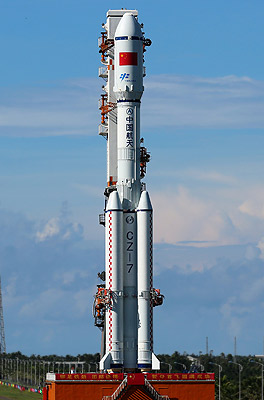 The CZ-7 series of rockets is a modular launch vehicle family to replace the CZ-2, CZ-3 and CZ-4 series.

The vehicle is fueled by Kerosene and LOX and features a 3.35 m core with two YF-100 engines. The stage 2 has the same diameter and uses the same fuels. The vehicle can be augmented by two or four 2.25 m boosters, each also powered by an YF-100 engine. A cryogenic upper stage is also available for high energy orbits.

The initial launch site is the new Wenchang Satellite Launch Center in the Hainan province. The maiden flight is planned for the end of 2015 or early 2016.