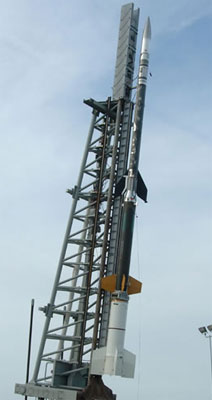 The Talos motor is 3.35 m long with a diameter of 78.7 cm. It is fitted with a conical adapter for mating to the second stage. Differential drag forces cause separation. Four fins are arranged at the aft end in a cruciform configuration and drive the vehicle to approximately one revolution per second burnout roll rate. Each fin is 0.64 m2 in area.

The Taurus motor is 4.19 m long with a principal diameter of 57.8 cm. The motor has the interstage adapter bolted to the forward end, which is then clamped to the aft end of the Black Brant motor. Each Taurus fin is 0.44 m2. Normally, the fins are canted to provide two revolutions per second spin rate at Taurus burnout. The weight of the booster system (with hardware) is 1363 kg, including 761 kg of propellant.

The 26KS20000 Black Brant V rocket motor has been modified for use as the third stage of the Black Brant XII. The nozzle cone has been extended as has the tailcan, and the diameter at the aft end of the conical extension is 57.8 cm. The motor case wall is thicker which permits use with significantly higher thrust lower stages. The standard Black Brant V fin panels are used even though the tail assembly is different. The modified Black Brant V rocket motor produces an average thrust of 7722 kg with an action time of 26 9 seconds. The primary diameter of the Black Brant V is 43.8 cm and it is 5.66 m long. Loaded weight of the motor is 1291 kg which includes 997 kg of propellant.

The standard payload configuration for the Black Brant XI vehicle is 43.8 cm in diameter with a 3:1 ogive nose shape. Payload length and weight limits for the Black Brant XI are not defined as they are for the Black Brant V and specific limitations for this system will be determined as the situation warrants. For payload weights of 317 kg, apogee altitudes of 500 km can be expected. A payload of 544 kg will reach 350 km. Both values use a launcher elevation angle of 85° from a sea level launch location. Standard hardware systems that are available for Black Brant V motors include aft recovery systems for 340 kg or 453 kg recovered weights, Ogive Recovery System Assembly (ORSA) for the same weight ranges, payload separation systems including a High Velocity Separation System and despin systems. These units are "stackable" such that a great deal of flexibility exists in meeting experiment requirements.