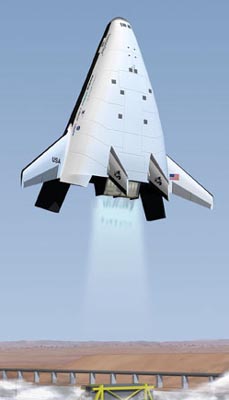 X-33 was an attempt to create a testbed for a future reusable launch vehicle. It was Initiated by NASA in 1994.

Specific technology objectives of the X-33 space vehicle include:

Specific test flight objectives would include demonstration of:

The reusable, lifting-body-shaped X-33, called VentureStar, was be about half the size of a full-scale RLV. The X-33 was not take payloads into space.

X-33 was to be launched vertically and to land horizontally on a run way. It was to use a new linear aerospike engine (J-2S), which was based on the J-2 engine of the Saturn-5. NASA considered the aerospike engine for the Space Shuttle 25 years ago, but opted to use the Space Shuttle Main Engine, also built by Rocketdyne. The aerospike has been revived and enhanced to power the RLV. The aerospike nozzle is shaped like an inverted bell nozzle. Where a bell nozzle begins small and widens toward the opening of the nozzle like a cone, the aerospike decreases in width toward the opening of the nozzle. The aerospike is 75 percent shorter than an equivalent bell nozzle engine. It is also lighter, and its form blends well with the RLV's lifting body airframe for lower drag during flight. The shape spreads thrust loads evenly at the base of the vehicle, causing less structural weight. The half-scale X-33 test vehicle will use two smaller test versions of the aerospike, while the full-scale RLV will use seven aerospike engines. The X-33 main propulsion system (full system of engines and propellant tanks) consists of two J-2S aerospike engines, one aluminum LOX tank in the front, and two LH2 tanks in the rear for short- and mid-range flights. The vehicle could sustain one engine out at liftoff and still have sufficient power from the remaining engine to continue acceleration and make a safe landing at the intended runway or an abort landing area depending on where the engine out occurred during flight. For the long- range flights an engine out situation could be tolerated approximately 30 seconds after liftoff.

Optimally, the flight test plan to meet Program objectives would involve flights of approximately 160, 720, or 1,530 km (100, 450, and 950 mi). Landing sites meeting the above criteria and providing 3,050 m (10,000 ft) of hard surface are referred to as short-, mid-, and long-range landing sites, respectively. The X-33 Program prefers to land the vehicle on a dry lake bed at least for its first flight in order to have a wider and slightly safer landing area than conventional runways offer. The same philosophy was used for the Orbiter's and most X-planes' first landings.

The launch site is located within Edwards Air Force Base, California. A total of fifteen launches are scheduled over a period of approximately one year. The X-33 will blast off from the site near Haystack Butte, located at the eastern edge of the Base near the AFRL/PR. Predominantly local NASA and USAF tracking and command assets will be utilized to support this phase of flight. Construction of the X-33 launch site at was completed in December 1998, just a little more than 12 months after ground breaking.

Once the X-33 is readied for flight, the engines were to be fired two times on the launch pad, with the second firing having a duration of 20 seconds. The longest flight was to be approximately 20 minutes at an altitude of about 55 miles. The plan was to demonstrate a 2-day turnaround for the vehicle. Landing sites included Silurian Dry Lake Bed, Michael Army Air Field and Malmstrom Air Force Base. One of NASA's 747s was to be used to carry the X-33 from its landing destinations back to Edwards.

Michael Army Airfield was to be the second landing site for the X-33. This will also be the first downrange runway landing. Michael Army Airfield is part of the Utah Test and Training Range, located south of Salt Lake City. This airfield is located on the eastern boundary of Dugway. The airfield has a 3,960 m long by 61 m wide hard surfaced runway. Immediate surrounding terrain is relatively flat. It is a secure facility with a long history of flight operations. The airspace above Dugway Proving Ground is restricted military airspace controlled by Hill Air Force Base which manages and approves use of the Utah Test and Training Range (UTTR). Seven flights were scheduled to Michael with vehicle speeds in excess of Mach 10. Flights were scheduled to start in the latter part of 1999.

Malmstrom Air Force Base was to be the third and final landing site for the X-33. The airfield was closed on 31 December 1996, except for the area used by helicopters of the Malmstrom's Air Rescue Flight. The airfield has a hard surface runway approximately 3,500 m long and 61 m wide with a 305 m overrun at each end. Five flights were scheduled to the Malmstrom runway with vehicle speeds in excess of Mach 15. Flights were scheduled to start in the spring of 2000.