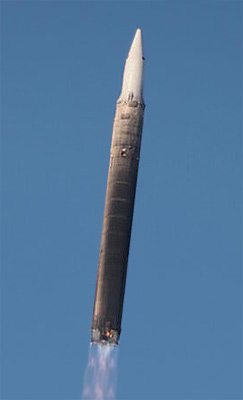 Strela is a minimum modification of the UR-100N-UTTKh ICBM as a space launch vehicle provided by NPO Mashinostroyeniya.

The warhead is removed during conversion, either retaining the fairing or replacing it by a different shaped one. The post-boost stage is retained as a minimum upper stage, contrary to the more elaborate Rokot (Rockot) conversion.

Strela is capable of launching spacecraft with a weight up to 1500 kg into low orbits with inclinations close to 63°. It is possible to change the inclination within few degrees due to lateral maneuver in the launching trajectory and it depends on the orbit altitude and payload weight. If required, the drop zones can be provided for the cases, when spacecraft are launched at other inclinations.

The launch site of Strela is Baikonur, where a former ICBM silo is used for launch. The rocket is hot launched from the silo. It was originally planned also to be launched from the Svobodny Cosmodrome, but Svobodny was closed in 2007, without seeing any Strela launches.

The first demonstration launch of the Strela launch vehicle from Baikonur cosmodrome was performed on 5 December 2003 with no further launches occuring for ten years.