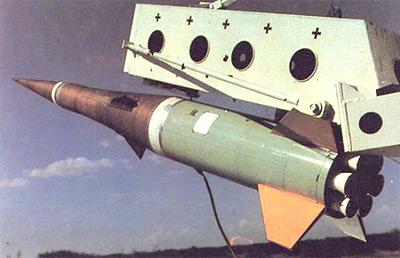 Used during the Sprint development phase, the Squirt test vehicle was designed to gather data on aero-thermal effects, or air friction heating, which would be encountered by "super fast missiles."

According to the official Anti-Ballistic Missile Project History "the ablative heat shield had to survive a low-trajectory, high-velocity environment that generated extremely high boundary-layer temperatures without allowing the underlying missile structure to be exposed to destructive temperature. Also, ablative materials had to be free of contaminants which would attenuate radar communications."

To address these issues, the five Squirt launches, challenged with progressively more severe conditions, looked at various construction and insulation materials for use on the Sprint nosecone.

Although Squirt did not replicate Sprint in design or flight characteristics, it was created to operate in a "Sprint environment," flying at three times faster than the speed of a rifle bullet, and thereby supplementing data garnered from wind tunnel testing. Sprint, the highest acceleration-guided missile to date, was designed to intercept ICBMs travelling 17,000 mph and after they have reentered the earth's atmosphere.

Designed by Martin Marietta, Squirt and its launcher were composed of readily available, off-the-shelf, missile parts. Squirt was a two-stage unguided missile, equipped with an X-band beacon and a telemetry system.

The initial launch came from a bundle of seven Recruit rocket motors. Following booster burnout a cluster of seven Cherokee rockets ignited to propel the Squirt down range. The first two tests used a poly sulfide propellant while the rest were to use a polybutadiene acrylic acid to achieve the necessary velocity of 9,000 feet per second.