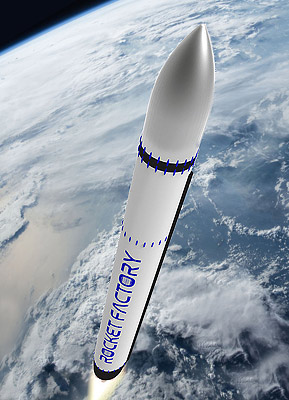 RFA One is a small liquid fueled orbital launch vehicle, which is being developed by Rocket Factory Augsburg (RFA), Germany, a subsidiary of OHB System.

The RFA One launch vehicle features three stages. Stage one uses nine liquid fuel engines. Each engine is based on a simple gas generator cycle. The turbo pump has been reported to have already been tested and is designed for additive manufacturing. Stage two uses a single engine with the same fuel combination. The tanks of both stages are built from metal. Stage three is a kick stage using green propellants and a flight proven engine.

RFA One will be capable of placing 1500 kilograms into a 700 kilometer sun-synchronous orbit. A maiden flight is planned for 2022. Andøya Space Center, Norway, has been selected as launch site. Additionally RFA entered an agreement with Southern launch to use the Australian launch site at Whaler's Way.