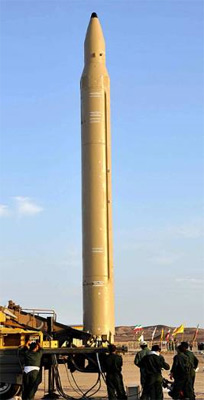 The Iranian Qiam-1 SRBM is a missile based on the Shahab-2 / Hwasong-6 Scud-C missile.

Qiam-1 is based on the Shahab-3 missile, but omits the fins for reduced radar signature and increased range It has a length of 11.5 m, a diameter of 0.88 m and a 750 kg seperable high explosive warhead, although other warheads are possible. Guidance is by an inertial navigation system. The range is up to about 750 km with an accuracy of 500 m, depending on the warhead. The missile is launched from mobile TEL vehicles.

The Qiam-1 was fist launched on 20 August 2010. It has been used in combat by Iranian forces atmilitants in Syria in June 2017

The Huthi rebels in Yemen use this Iranian supplied missile under the designation Burkan-2H. They have launched several against targets in Saudi Arabia in 2017.