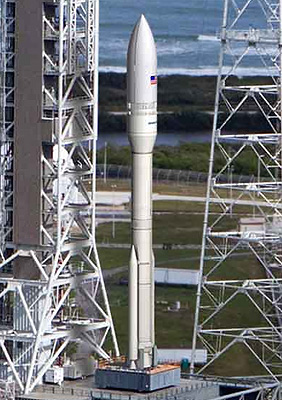 The Northrop Grumman Innovation Systems (NGIS) (formerly Orbital-ATK) OmegA, formerly known as NGL (Next Generation Launcher), is a planned launch vehicle to provide EELV-class performance as an alternative to Falcon-9 and Vulcan.

The vehicle is to consist of two Shuttle SRB derived solid rocket motor stages: a 2 segment Castor-600 and a 1 segment Castor-300. As a third stage, a cryogenic LOX/LH fueled stage powered by two RL-10C-5-3 is planned. Depending on the needed performance, the core vehicle can be augmented by up to six GEM-63XL solid rocket boosters.

ATK envisages a 2021 maiden launch, if the full development is approved. The designated launch sites are Cape Canaveral LC-39B and Vandenberg SLC-6.

OmegA was cancelled in August 2020 after it was not awarded a contract in the NSSL-2 program.