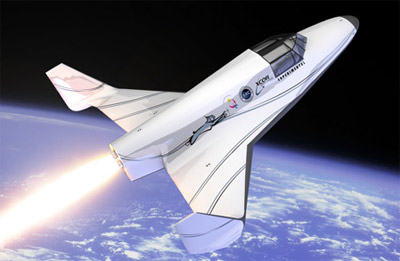 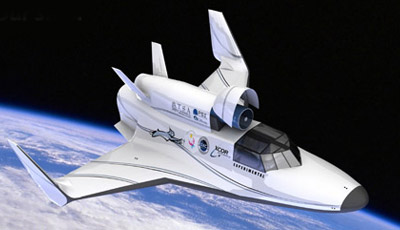 The Lynx is a reusable suborbital rocket plane that takes off and lands horizontally, which is under development by XCOR Aerospace. The Lynx is designed to carry one pilot, a ticketed passenger, or a payload above 100 km altitude.

The Lynx rocket plane is powered by the XR-5K18 piston pump fed LOX/RP-1 engine using an expander cycle. Lynx is designed for aircraft like operation which enables four or more flights a day, and will also have the capacity to deliver payloads into space.

The initial prototype, Lynx Mk.1, is heavier than the later operational vehicle due to a aluminium LOX tank. It will be able to carry a pilot and 120 kg payload or a passenger to a height of 62 km.

The production version, Lynx Mk.2 features a composite LOX tank and a non-toxic reaction control system. These improvements will enable the vehicle to reach a height of 100 km with pilot and 120 kg payload or a passenger.

The Lynx Mk.3 is a modification of the Mk.2 version, which features a External Dorsal Mounted Pod to carry a payload of 650 kg. This payload can be an upper stage to launch a microsatellite or multiple nanosatellites into low-Earth orbit.

A maiden launch of the Lynx Mk.1 was planned for 2015, but has been delayed. XCOR announced in January 2016, that due to technical hurdles they had not assigned a new projected date for test flights. Initially, Lynx missions will be staged from Mojave Air and Space Port, Mojave, California.

In May 2016, XCOR laid off a number of employees at its facilities in both Mojave, California, and Midland, Texas. According to company officials, XCOR was concentrating its resources to develop the 8H21 liquid hydrogen engine under a contract with United Launch Alliance announced in March 2016, which effectively puts the development of the Lynx on hold.