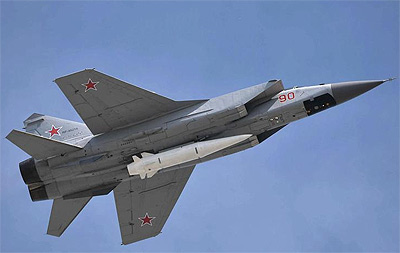 The Kinzhal air launched missile is a derivative of the Iskander-M SRBM, which is modified for air launch by a MiG-31BM aircraft. The missile is touted as a hypersonic weapon.

The air launched missile has reportedly a range of ~2000 km, increasing the range much over the 500 km range solid-fuel Iskander-M SRBM. The missile has different fins than the ground based version and features a jettisonable aft cap, which protects the nozzle and improves aerodynamics while carried by the MiG-31BM jet.

The missile was first shown in public in March 2018.