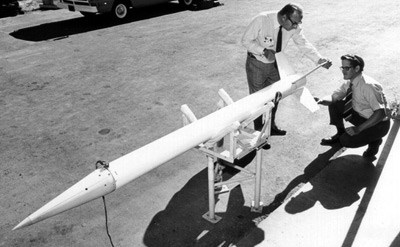 The Kangaroo (XPWN-9A) meteorological solid fueled rocket was developed from 1968 into the early 1970s by CSD.

The mission was to launch a meteorological dart to an altitude of 122 km. A unique feature of the Kangaroo was that the dart (usually mounted atop the booster) was housed within a canister inside the motors combustion chamber. An end-burner grain at the base of the canister determined when motor chamber pressure reached the darts aft end. At the correct balance of pressure loads and flight acceleration loads, the dart was ejected from the canister. Moving forward the dart broke open the vehicles frangible nosecone, sliding through the darts fins housed within the nosecone. The aft end of the dart was flared to pick up the fin assembly when exiting the canister. The booster burned out at 5.5 km, but the aerodynamic efficiency of the dart carried the dart to 122 km.

An additional requirement was that the Kangaroo booster have stable flight after dart separation and return to the earth in a predictable manner. This resulted in the vehicle having unusually large fins.

Two Kangaroos were launched from San Nicolas Island, off the coast of Pt. Mugu, CA. Radar did not successfully track the birds. A subsequent launch at White Sands, NM was fully successful. Shortly afterward, the Navy decided they did not need the system.